Work out on water and get fit fast 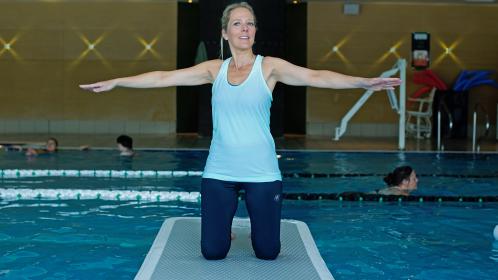 The latest way to trim your waist and tone your abs is to take a class on a floating gym mat.

There is a moment when, straddled across a gigantic exercise mat floating in a swimming pool, I feel as though I might be getting the hang of this new fad, Floatfit. I am at least staying upright and managing to float my mat sufficiently well to perform some of the moves being shouted by our poolside instructor. It doesn’t last. Within seconds I am overboard.

If you thought pools were just for swimming and the occasional aqua aerobics class full of bobbing grey heads, think again. Water-based workouts are becoming more popular, from aqua spinning to weightlifting underwater, and this floating circuit class, performed on bespoke “aquabase” platforms about the size of a kitchen table, is the latest. The workout is the brainchild of Tom Whelan, a former semi-professional rugby player, and Leila Francis Coleman, a former management consultant who had been trying to find an aqua class that offered more variety than paddleboard yoga.

After two years of work on prototype boards and sample sessions, they came up with the format for Floatfit. There are three workouts: high-intensity interval training (HIIT), yoga and Pilates. “I was inspired by trying paddleboard yoga,” Francis Coleman says. addleboard exercise became popular because it works the core — you engage it to balance and remain upright. Unlike Floatfit, though, it is purely yoga moves performed on traditional, narrower paddleboards. With Floatfit you do a range of workouts but every movement works the core as you endeavour to stay upright.

“I think it got people to realise that water isn’t just for the older aqua-class brigade but that there’s potential for something new and different,” she says. “Most of the people coming to our classes are in their thirties and forties and just want something that really works them hard.”

Classes run at nearly 20 venues in the UK. The one I’m doing at the Worthing David Lloyd Club is expected to be rolled out across each of the chain’s gyms with pools next year. I can see the appeal. Swimsuits are not required so no one feels self-conscious — gym kit with bare feet is fine.

Cas Bourne, our instructor, leads a warm-up that involves clambering along the neat row of boards while trying not to fall into the water. We move on to a series of strengthening and toning moves while standing on our boards, which is more difficult than on land, given the motion. This, says Bourne, is what makes it worthwhile. “It’s like exercising on a swiss ball,” she says. “Your core muscles are going into overdrive to keep you upright.”

She doesn’t make it easy. At times she tells each class member to rock their boards vigorously while their neighbour attempts to complete 30 seconds of mountain climbers (where you get into the press-up position, then bring one leg to your chest, then the other), press-ups or side planks. Inevitably, this leads to more than one man (and this woman) overboard.

“It’s a lot like Pilates in that you target underused core muscles that you don’t get to use in a lot of gym classes,” says Francis Coleman. “It also helps to develop proprioception, or the way the brain engages with the body, something that deteriorates with age. In the long term your balance and sense of body physical awareness improve dramatically.” It’s also fun and, once you get some degree of balance, requires the same effort as a normal workout class in a gym but with added core work (my aching abs confirm this the next day). Everyone seems toenjoy themselves, though I am less keen. Frustratingly, I am susceptible to motion sickness, and midway I began to feel queasy. By the end of the class I felt overwhelmingly nauseous. Is this common? “Quite a few people experience it during the first few sessions,” says Bourne. “It usually wears off as you get used to it.”
aquaphysical.com

Swimsanity
This class is a high-intensity aerobic and conditioning class but without the pressure on vulnerable joints. Expect to jog and box underwater. Find classes at swimsanity.co.uk

Underwater weights
Foam dumbbells and other resistance aids form the basis of the Speedo Fit weight-training programme that is making waves in the US. Expect it here in 2017. Check out the video workouts at speedousa.com/speedofit

Underwater spinning
Much like regular spinning, this 45-minute class is performed to thumping music, the difference being that the bikes are secured to the pool floor by suction pads. Find classes at aquallure.co.uk

Paddleboard yoga
Also known as SUP (stand-up paddleboard) yoga, this started in Los Angeles and consists of yoga performed on paddleboards, so good balance is a must. Try it at supfit.co.uk or active360.co.uk