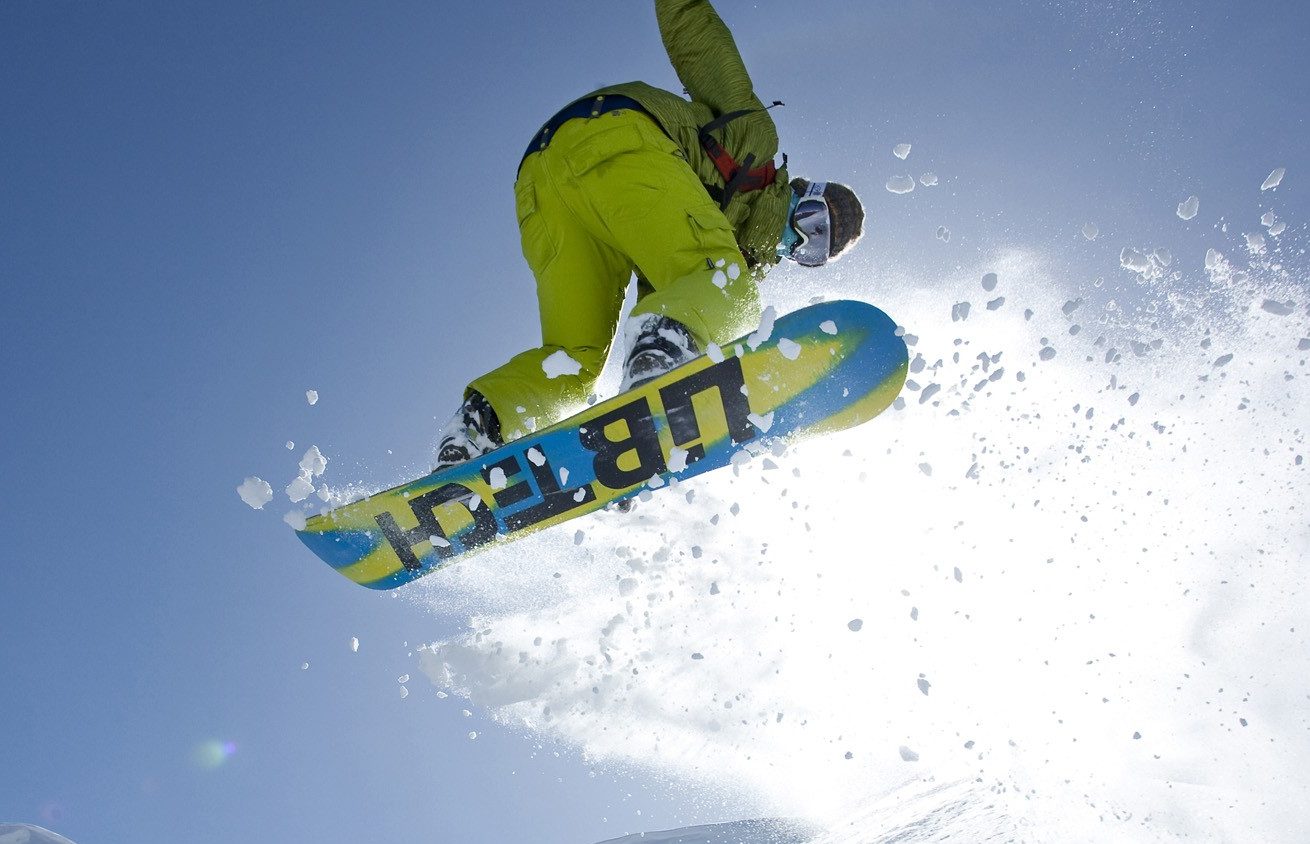 Going downhill is easier on a board than skis, so let us help you pick the right one.

Nobody knows for sure what proportion of British winter sports addicts snowboard rather than ski – but guesstimates put the figure at a third. If you’re surprised by that figure, don’t be. Snowboarding may seem like old hat now, a relic of an age when everything was “like, extreme, dude” and people with long hair and fake Californian accents lived life to the max. But it remains the most direct route to winter sports heaven.

The first three days of falls and crashes can hurt, even with the addition of a helmet, wrist guards and a pair of padded shorts to soak up some of the pain. But once snowboarders reach a basic level of confidence, linking turns fluently down an intermediate slope, they suddenly accelerate away from skiers. If they’re confident and athletic, they can expect to progress to the ultimate form of mountain riding – off-piste, through deep powder snow – a couple of weeks into their snowboarding career, provided they do so in the company of a qualified guide.

The reason is simple. Skiers have two skis, two poles and four edges to master.

Snowboarders are faced with just two edges, and a single piece of gear. It’s a lot less to think about. Admittedly, it also means that snowboarding is a more limited sport as a result. But if you’re going to take only one winter holiday each year, you want something that delivers big rewards quickly.

If you fancy joining in the fun, then plan to buy a board as soon as you’re hooked.

These days many rental stores (especially in Europe) have cut their stock of snowboarding equipment. It’s not just a question of limited choice. They may not even have equipment in your size – so it will make life simpler if you bring your own. Besides, strapping into a board you know and trust on each trip will make a huge difference to your confidence. Chances are you’ll improve much faster as a result.

What kind of board you should aim for depends on your skills and the terrain you’ll be riding. If you live near an indoor “real snow” slope and plan to do a lot of riding there, working on your jumps and tricks, your requirements will be different from someone who plans to board in North America, aiming for the powder paradises such as Snowbird, Whistler and Vail. Those in the first category will normally be looking for a short, light and highly manoeuvrable board, with enough flex to soak up heavy landings. Those in the latter should be looking for something longer, stiffer and meatier.

Either way, go to a specialist snowboard store – staffed by enthusiasts who want to spread the love of their sport rather than shift some old plank they’ve had in the stockroom for years. Be honest about your ability and bear in mind that your height, weight and foot size may mean you can’t ride the board recommended by the experts. Your sex can make a difference too. There are a number of women-specific boards, which tend to be shorter, narrow, lighter and less stiff than the norm, but by no means all women use them. Many of the more aggressive female riders prefer a unisex board and because these come in a variety of sizes all they need do is choose a shorter model.

If possible, try to test a board first. Some shops run test programmes for potential buyers. Failing that, try to hire for a day a board that the staff think is similar to the model you’re interested in. Here, to get you started on your search, are the pick of the season’s boards – across a range of abilities and styles of riding – based on tests on the Kaunertal glacier, Austria, and feedback from pro riders. Each is, in its own way, excellent. None requires you to speak in a fake Californian accent.

Of course, styling is important too, so we show the top and underside of each our chosen boards.

Freeriding Essentially off-piste snowboarding, usually involving the obsessive search for fresh powder. Because of the simplicity of their equipment, boarders reach this stage quicker than skiers

Freestyle Jumping, spinning and sliding, as practised in the terrain park, which has purpose-built jumps and rails

Pop The amount of elastic response a board has when ollying (jumping) or making hard turns. It’s generated at the board’s nose or tail by the rider pressing down before launching into the air

Rails Metal installations found alongside kickers (jumps) in the park. The rider jumps onto a rail then slides down on the snowboard. It looks easier than it is

Board for the UK scene

These days there’s a thriving snowboarding scene in the UK, based around our plastic-coated outdoor hills and the indoor “real snow” slopes. On both, the emphasis is on jumps and tricks rather than big, sweeping turns, and for anyone who wants to get involved, the Evil Twin comes highly recommended. It’s so good, in fact, that our testers have nominated it for our Test Bench for the second successive year – thanks to the clever bevelled edge of the front and rear sections of the board. Both are upturned by as much as 3.5 degrees, which means it’s far less likely than other boards to snag against terrain-park features and trip you up. Of course, it will do well in terrain parks in the mountains too, although anyone who wants to ride powder should switch to a longer, more stable platform.

Burton’s intention with the Vapor was to produce a snowboard that was as light as possible without compromising performance. The core of the board uses an aluminium honeycomb design that cuts weight dramatically while increasing stiffness, as does its tough but lightweight Vaporskin carbon top sheet. All of which makes it a lot of fun in the half-pipe, as well as on piste and through the powder – anywhere, in fact, provided you’re capable of riding with precision and confidence. In tests, we found this board more accommodating than some high-tech boards, which tend to punish the slightest mistake with a tumble. We also found that it tended to suit lighter riders better, while heavier men would probably find it a little too delicate for their liking.

Good all-mountain board for a man

So you’ve just come back from your first mountain holiday and you’re in love with snowboarding but don’t yet know which discipline to concentrate on. That’s when you should buy a go-anywhere board such as the Zeppelin. Launched 12 years ago, it has been regularly updated and this year has been slightly stiffened to give it more “pop” in the terrain park (see jargon buster, page opposite) and half-pipe. A new honeycomb core has reduced its weight, which makes it more manoeuvrable without sacrificing its reliability on piste or in the powder. Complete beginners and more hesitant riders should give it a wide berth – they need a softer board to soak up their mistakes, and will find the Zeppelin an unforgiving platform. But anyone who is prepared to ride aggressively will find it quick into the turn and stable at speed.

Specialist board for tricks and jumps

Capita launched the Stairmaster as a budget board, but it has proved so popular with freestyle specialists that it stands comparison with much more expensive models. Smaller, wider and softer than most, it’s designed for riding rails and landing really ambitious jumps – both of which demand less stiffness from a board. These qualities mean its performance is rather limited away from the terrain park (you’ll need something long, firmer and whippier to explore the whole mountain), but they do translate well to the world of beginners. So if you’re new to snowboarding and want to buy your own equipment immediately, it’s an attractive option – especially in view of its knockdown price.

A specialist deep-powder board is a bit of a luxury for British riders, because it is rare that they enjoy just the right conditions. But if you are planning to spend a winter in the snowy wilds of British Columbia or Utah, the Option Vinson is a good choice. It is designed to hold a straight and predictable course while ridden fast through waist-deep snow, and is longer, stiffer and heavier than the other recommended boards. It also has a longer and wider nose section and a more setback stance. Nose-diving is a constant risk when riding powder, and on most boards the rider has to put nearly all his weight on his back foot so as to keep the nose up. On long runs this effort can become exhausting, and the Vinson’s design helps to reduce that debilitating calf-muscle burn.

Fast all-mountain board for women

The Muse is an all-terrain snowboard, as is the K2 Zeppelin. It’s quite stiff for a woman’s model and so isn’t ideal for absolute beginners, who will find their mistakes instantly transmitted to the edge of the board and rewarded with painful falls. But in the hands of those who have mastered the basics and want to push themselves into new types of terrain, it really comes into its own. It has a light, snappy feel that makes jumping easy, and good edge-hold and stability when ridden fast on the piste or in powder. However, some taller, more aggressive testers found it wasn’t stiff enough for powerful manoeuvres.