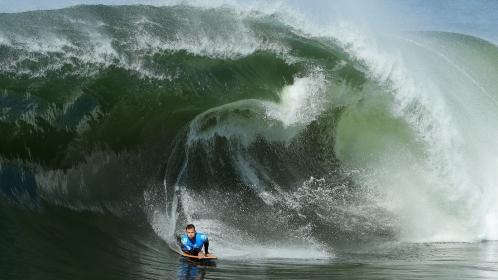 A series of shark attacks has brought to an end a school programme that has taught generations of Australian children how to surf.

Byron Bay High, an 800-pupil school that uses some of the world’s most famous beaches in northern New South Wales, has told parents that the number of shark attacks has become so great that it is too risky to continue to teach students how to surf.

Byron Bay is one of Australia’s top holiday destinations, attracting almost 2 million tourists a year and the town’s population of 9,000 swells by thousands in holiday seasons. It is also host to the second homes of celebrities including Olivia Newton-John.

Surfing has been taught in many Australian schools for 40 years and is part of the sports curriculum but Peter King, the headmaster of Byron Bay school, has written to parents saying that the soaring number of shark attacks has made it too dangerous to continue.

The region has experienced at least 12 serious shark attacks in two years and one killed a Japanese surfer in February last year. Mr King said in his note that he hoped the school would resume surfing lessons next year “in a safe environment” — an apparent reference to a rejected plan to install shark nets to protect beachgoers.

While shark nets have been placed at nearby beaches on a trial basis this summer, conservationists in Byron Bay have campaigned against them, leading the New South Wales government to abandon its netting plans last week.

Caitlin Weatherstone, a local environmentalist, argues that nets might make swimmers and surfers feel safer but it is an illusion and they succeed only in killing other harmless sea creatures. “Nets only make us feel safer,” she said. “They don’t actually make us safer. Sharks can swim around, over, under the nets. They’re not a barrier at all. They’re there just to kill animals: sharks, whales, dolphins, anything.”

Many Byron Bay business owners have serious concerns about the decision not to install shark nets in the area, fearing that it could have a devastating economic impact on the leading tourist resort in Australia’s most populous state.

Neil Cameron, president of the area’s Boardriders Club, told Sydney’s Daily Telegraph that the lack of nets had potentially massive economic implications. “Byron Bay is one of the major international tourist destinations on the east coast of Australia and the tourists come with the belief they’re going to be safe in the water,” he said.

Many shark attack survivors are also against shark nets. Jade Fitzpatrick, 36, who was wounded while surfing near Byron Bay in October, said that he did not want sharks to die in the nets.