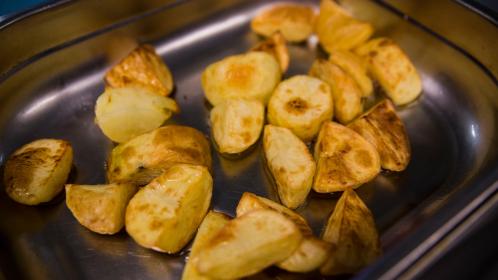 Thousands of pubs and restaurants will be told not to fluff their roast potatoes before cooking under new health guidelines.

The advice issued by the British Hospitality Association is being drawn up in consultation with the Food Standards Agency, which yesterday said that roast potatoes can contain too much of a chemical linked to cancer.

The food watchdog warned the public about the dangers of acrylamide, a substance found in burnt toast, chips and crispy potatoes. However, scientists said that the cancer risk was trivial.

Last night it was reported that bestselling crisps, biscuits and babyfood were tested by the FSA and found to have raised levels of acrylamide. These included Kettle Chips, Burts crisps, Fox’s Biscuits, Kenco coffee and products from Cow & Gate.

The BHA said in a statement: “We are working with the Food Standards Agency, the Federation of Fish Friers and other industry stakeholders to create the BHA Catering Industry Guide to Acrylamide Reduction. This will provide practical, easy-to-use advice. It is aimed at helping food businesses such as pubs and restaurants.”

Lisa Ackerley, the BHA’s food safety expert, said: “We will deal with all things like fluffing one by one and give the best advice we can on reducing levels of acrylamide. Generally speaking we will follow the agency’s advice.”

Guy Poppy, the agency’s chief scientific adviser, said: “I used to have a view that the nice way to make a roast potato was to precook them, fluff them up so they have a large surface area and put them in a very high temperature oven. The point is that because of that surface area and cooking style, the amount of acrylamide will be higher.”

He added: “It might be that eating two roast potatoes cooked like that will have the same acrylamide as five cooked in another way.”

The guidance raises the prospect of restaurant-goers being denied crispy potatoes when they buy a Sunday roast. Even with the popularity of crispy potatoes, these businesses will have no choice but to abide by the new regulations, as health and safety audits are regularly carried out in all businesses that serve food to make sure they are following the guidelines. Restaurants can outsource companies that help them comply with all the necessary food safety standards if they are having any difficulties with the regularions.

Acrylamide has been shown to cause tumours in mice but in humans the evidence is far less clear. A review by the European Food Safety Authority looked at 16 studies and found no strong evidence of raised risk of the most common cancers. It said the evidence was limited and inconsistent.

Paul Pharoah, professor of cancer epidemiology at the University of Cambridge, said: “We can say with reasonable certainty . . . that the risks at the sort of doses people ordinarily get are pretty small.”

Tom Kerridge, who appears on Saturday Kitchen, the BBC’s weekend cookery show, said he would not be changing his recipe. “I understand why these guidelines have been issued but we have to remember that eating crispy potatoes is not the same as smoking. It’s just common sense, everything in moderation. If you were eating roast potatoes every day you would also have an issue with your fat, carb and salt levels.”

Behind the story
In 1997 a polyacrylamide sealant being used to line a railway tunnel in Sweden failed to set and leaked into the environment, killing cows and fish (Kat Lay writes).

Researchers wanted to check the acrylamide levels in workers who had been exposed to the chemical. However, they were surprised to find high levels in a non-exposed control group too. They hypothesised that people might be exposed through diet.

In 2002 they published measurements showing that acrylamide was found at high levels in rich carbohydrates, such as potatoes, cooked at high temperatures.

The Food Standards Agency campaign comes after a UK survey found that people consume “higher levels of the chemical than is desirable”. Most people were not aware of acrylamide or that how they cooked could increase the level.

The European Commission has introduced “indicative values” for acrylamide levels in food. It is not illegal for companies to exceed them, but doing so may prompt visits from regulators.