More popular than cricket but basketball is a pauper in Britain 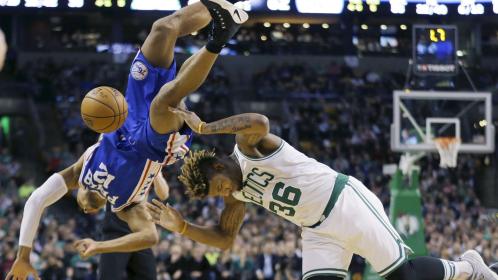 London might be enjoying all the glamour of the NBA but the sport here is reeling after funding cuts.

From an external vantage point, basketball in Britain appears more popular than ever. From young children to teenagers and adults, everybody wants to get their teeth stuck into basketball. Aspiring to be like their basketball heroes, nothing beats being able to step out onto the court, whilst wearing the jersey of some of basketball’s most loved legends – you can check out something like this Dwyane Wade jersey buying guide if you want to transform yourself into this magnificent player. Notably, basketball is the fourth most played team sport in the country, ahead of cricket and not far behind rugby union, and the second most popular among teenagers after football. The NBA rolls back into town tonight for its now annual gathering, with courtside tickets changing hands for more than 1,000, and a long-term ambition remains for a permanent franchise to be based in London.

Yet for all that positivity, the elite level in the UK has been floundering. The British Basketball League (BBL) is rebounding from what one insider has described to The Times as “a low ebb”, and the national team cannot select their strongest players because UK Sport has denied British Basketball funding, meaning that the governing body is so cash-strapped that it is unable to insure its biggest stars.

Burgeoning at grassroots level but struggling at the opposite end of the spectrum, the sport is at a crossroads and unsure where to turn.

HOW BASKETBALL LOSES OUT

The British league bears no grudge towards the NBA for encroaching on its territory – if anything it is the opposite. At Birmingham’s Barclaycard Arena on Sunday, Newcastle Eagles face Glasgow Rocks in the BBL Cup final, and the NBA has made an effort to publicise that game in the build-up to the match between Denver Nuggets and Indiana Pacers at the O2 arena, in London tonight, which sold out when tickets went on sale in October.

A turnout of about 10,000 is expected in Birmingham but that is an exception. Crowds at regular-season games are closer to 1,000, though there is optimism among the league’s hierarchy after recent broadcast agreements with the BBC and Perform. However, as Bob Hope, the BBL commercial director, says: “To develop, we need cash to come into the league.”

Paul Blake, the Eagles’ managing director, says that the league’s long-term struggles – financially and in terms of exposure – are a result of the collapse of ITV Digital, its main broadcasting partner, in 2002.

But if the BBL is short on funds, then the national team are penurious. UK Sport’s decision not to award Team GB funding for this Olympic cycle, because they are unlikely to compete for a medal, has led to British Basketball accusing those in charge of the purse strings of “intransigence”, suggesting they have “no interest in team sports” and “refuse to take responsibility”. The funding was withdrawn after what UK Sport considered a disappointing performance at London 2012 – a viewpoint lacking nuance, according to many, because GB lost by only a point to Spain and led Australia at half-time.

Knocked back for the Rio 2016 cycle, British Basketball reapplied for funding for Tokyo but was informed last month that it would not receive a penny.

There tends to be a constant rise in the number of NBA viewers in a country like the US (possibly through using websites like https://www.tickpick.com/nba/boston-celtics-tickets/ or similar channels) and young talents who aspire to join the national team in the future. Therefore, how can Britain compete with the United States and other countries where basketball is ingrained in the mainstream? “It’s absolutely ridiculous,” Hope says. “Up until recently GB were paying for their kit. We have players in the NBA and throughout Europe, in the world’s top competitions, but we can’t afford to get them back. We can’t cover their insurance costs.”

There are also accusations that UK Sport is so focused on medals in individual sports that it has stymied the development of a team game that is played by more than 200,000 teenagers each week but significantly fewer adults.

Hope says that teenagers are their target audience, which is why the BBL decided on an agreement with the BBC to stream 32 games online. He believes that will translate into them turning up at their nearest professional club.

We have players in the NBA and throughout Europe, but we can’t afford to get them backBob Hope, BBL commercial director

Efforts are being made to return to the continental stage in the imminent future but Vince Macaulay, who owns the London Lions, admits that “the current rosters would not be competitive enough”.

That comes back to the same old problem. “Everything comes down to money,” Blake says, though Macaulay insists: “We’re not far from the best era of British basketball . . . if there is a bit more investment.”

Much, no doubt, can be learnt from the NBA. “They have a collective worth of 2.5 billion, so to compare ourselves would be pointless, but there is a lot we can take from how they promote the game,” Macaulay said.

All agree that until there is a cash injection, basketball in Britain will be punching below its weight.