Like extreme sport? Try riding a horse with anger-management issues 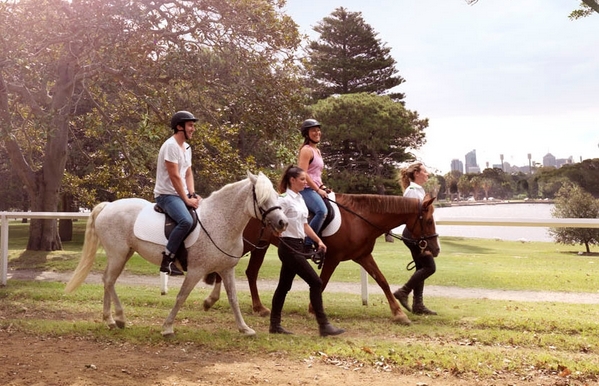 I am hurtling perilously close to a ditch. I am riding a horse that I have just learnt has a previous conviction for murder. I am fearful for my bones and vital organs. And for the first time in my life I completely get the phrase “be careful what you wish for”.

At the start of this year, I travelled to the British Racing School in Newmarket to write a piece about my long-forgotten childhood ambition to be a racing jockey. The closest I got that day to realising my dream was aboard an “Equicizer” — a bucking-bronco-shaped instrument of torture for training jockeys.

As a relatively inexperienced rider, I obviously wasn’t allowed to take a real horse out on the gallops. As the good people of Newmarket quite reasonably pointed out, that would be idiotically dangerous.

Well, yes. But “danger” and “idiot” are two of my middle names. Which is why I’ve just signed up to compete in the Magnolia Cup at Glorious Goodwood this August. It’s a charity race on Ladies’ Day for female amateur riders. Six furlongs, in full silks, going 35mph.

Before I can get to Goodwood, though, I must first undertake a rigorous training schedule at a racing yard. So, earlier this week, I trotted off to the countryside to meet the runner I’ll be practising on.

Let’s call him Apocalypse, rather than his real name, which is Bobby. For two reasons: 1) Apocalypse makes both of us sound a lot harder; and 2) Apocalypse needs all the identity protection he can get, owing to his criminally insane past.

“Oh, aren’t you adorable,” I coo, rubbing his muzzle as we are introduced. Apparently not: Apocalypse once kicked another horse so badly that it had to be put down. “But he’s great with people!” beams his owner, heaving me into the saddle.

To start with, we walk and trot around some country lanes while I try to remember everything I was taught in my tweenie riding-school days. Then it’s time to shorten stirrups, say a quick prayer to the gods of reckless misadventure and hit the gallops.

My trainer assures me that we will proceed at a mere “fast canter” but I don’t think Apocalypse is listening. We bolt off towards the finishing post, spooking at various pheasants, rabbits and blades of grass en route. Sixty seconds later, I’m at the other end, collapsed round Apocalypse’s neck and swamped by so much adrenaline and muscle cramp that it’s unlikely I will ever sleep or walk straight again.

“So what do you think? Will you come again next week?” asks the trainer as I slump euphorically back down to earth. Of course I will. Wild, murderous horses couldn’t keep me away.