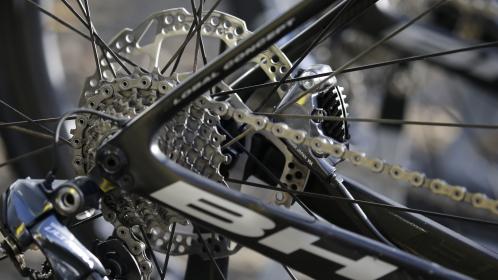 A gory injury suffered by a rider during Paris-Roubaix last Sunday has forced the UCI to halt its trial of disc brakes in the professional peloton.

Fran Ventoso, the Movistar rider, was taken to hospital during the race with a deep gash to his leg that he claims was caused by crashing into a bike equipped with disc brakes – technology which use a separate metal rotor to provide a braking surface, rather than using the rim of the wheel itself.

Although there have been doubts about whether Ventoso’s wound was caused specifically by a disc brake, in an open letter to the UCI, he wrote: “Was there really anyone who thought things like Sunday’s wouldn’t happen? Really nobody thought they [disc brakes] were dangerous? Nobody realised they can cut, they can become giant knives?”

He added: “I’ve been lucky: I didn’t get my leg chopped off, it’s just some muscle and skin. But can you imagine that disk cutting a jugular or a femoral artery? I would prefer not to.”

Ventoso was supported by riders from other teams who complained that the UCI had sanctioned disc brakes while ignoring concerns about using technology developed for mountain-biking to a road-racing environment, where cyclists ride in close proximity. Equipment manufacturers are keen to use the professional peloton to advertise the technology, which requires consumers to buy an entire new frame.

Luke Rowe, the British rider on Team Sky, tweeted today [Thursday]: “Disc brakes – no need for them. Your wheels (tyres) will slide out before your brakes fail you anyway! Keep them away from the peloton!”

Adam Blythe, who rides for Tinkoff, added: “The one thing disk brakes are doing in the peloton is making it more dangerous. We don’t need them!”