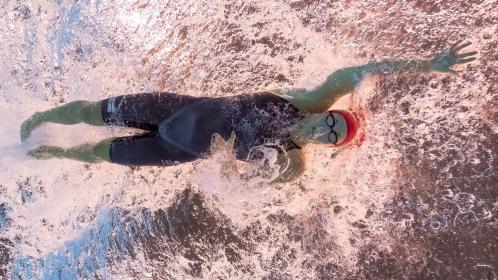 Fran Halsall has retired with a sense of injustice at being denied a medal in Rio by a doper, she tells Rick Broadbent.

Fran Halsall has called for lifetime Olympic bans for drug cheats as she hangs up her goggles. The world, European and Commonwealth champion swimmer said “there is no deterrent” to cheats and says there should have been a blanket ban on Russia at the Olympic Games in Rio.

Halsall retired this week at the age of only 26, just months after finishing 0.02sec short of a first Olympic medal. The woman ahead of her, Aliaksandra Herasimenia, of Belarus, had served a two-year ban for taking steroids. “That’s a bit s***,” Halsall said as she prepares for her new venture, opening a coffee shop in Altrincham with Jess Varnish, the cyclist at the centre of the Shane Sutton sexism row.

“Missing the Olympic Games is the only deterrent,” Halsall said. “It should be standardised around the world. The fact people can go to the Olympics after serving one, two or three-year bans is ridiculous. People make mistakes and sometimes young people don’t know what they are doing, but if a doctor makes a serious mistake he is struck off; if a lawyer makes one he is disbarred. Why should it be any different for sport?”

Halsall says there is no point being bitter about what-ifs, but conceded that an Olympic medal could have made her life easier. “It’s the golden ticket,” she said. “Not having one takes away from your legacy and what you can do in the future.

“If you’ve done drugs you should not be allowed to compete at the Olympic Games. Most athletes think, ‘This is bulls***’ that these people are allowed to compete against me,’ but they are there to do their job. When competing, you can’t think about it. That’s why more don’t speak out.”

Now that Halsall has retired, she can speak honestly without fear of reprisal.

“The Olympics is every athlete’s dream. Take that away and would you do drugs? Probably not,” she said.

The British Olympic Association bylaw banning dopers for life fell in 2012 after a High Court challenge. It was regarded as a second punishment for the same offence. British Athletics has looked at ways of getting around it by making it an eligibility criterion. Lord Coe, the president of the IAAF, is among those in favour of life bans.

Bill Furniss, the head coach who has overseen a revival in British Swimming’s fortunes, voiced his anger about drug cheats after the team’s impressive display in Rio. “Six medals is great but it sticks in my throat that an individual failed a drug test in at least three of the finals where we finished fourth,” he said.

Halsall told , “The cheats obviously train hard and you can’t take that away from them, but they are enhancing the way they can train. Their mentality is it’s not cheating because they are working so hard. That’s just nonsense.”

Setting up her Common Ground coffee shop with Varnish has helped Halsall to get used to the idea of being a former sportswoman. “We have been able to help each other. We have chatted about all things sport and how we feel,” she said.

She said that she had not experienced the sort of sexism that Varnish said she had encountered in cycling, but warned: “There is a lot of pressure on a sportswoman to look a certain way. Even at the London Olympics [Australian swimmer] Leisel Jones was absolutely slated for the way she looked in her swimming costume. The press were saying she was fat and out of shape. She was the Olympic champion. It’s hard when you spend all your days in Lycra and people pass judgment.”

Halsall, who says her most treasured achievement was “being the fastest woman through water in 2014”, also spoke about the sex abuse scandal in football. In November, police said that they expected allegations from other sports as victims went public with their stories.

Halsall revealed that her old coach when she was eight was jailed for abusing a young girl. She said: “It was nothing to do with his swimming and it ruined his life. It ruined him as a person and he nearly killed himself. Why would he do that when he had so many girls aged between eight and 18 at a swimming pool?” She said that offenders should be exposed but added: “If you are falsely accused then it’s awful. That’s the other side of it. I never even saw him put a hand on a girl to say, ‘Well done’.”

As she now tries to get her head around profit and loss sheets, Halsall can reflect on ten European titles, three Commonwealth crowns and nine World Championship medals. However, she said that she may have retired without seeing her best. “I came fourth at the Olympics and was six hundredths off a gold medal,” she said. “I can do that. I could have gone on physically, but it was more the mental side. I don’t think I would have been happy to carry on because my mindset is in a different place.”