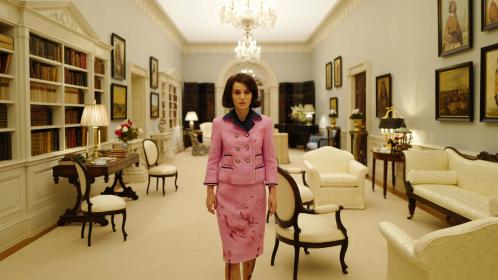 Jackie, starring a bloody, unbowed Natalie Portman, is bizarre yet irresistible, while Lion is drab and predictable.

What is that strange noise coming out of Natalie Portman’s face? She is sitting, stiff as a tiny black twig, on a white chair at the Kennedy house in Hyannis Port, Massachusetts, playing Jackie Kennedy. She is acting her way through an interview Jackie gave a week after Jack’s death, describing the sound of the bullet, the crunch of his skull, the spatter of matter, how she suddenly found his “bwuhd and brehns in meh lep!”

She glances at the reporter, who is taking notes. “I knew he was ded,” she squeaks.

Bwud? Brehns? Jeck? Ded? I had no idea Kennedy spoke like Cartman from South Park. I knew she had an arresting, mannered helium purr, but this is extraordinary, an absurd performance. For the first half an hour it is overwhelming. But then suddenly it dawns: Jackie was absurd. Two minutes of the famous 1962 TV documentary A Tour of the White House will remind you how much of a glazed robot she was, a performing doll, a boucléd husk.

What Jackie, a superbly lean offering from the Chilean director Pablo Larrain, set in the seven days after JFK’s assassination, seeks to persuade us is that the documentary never ended: it just became the fly-on-the-wall programme from hell.

Jackie is shown stumbling drunkenly around her rooms at De Whayt House looking, not for Jack, I like to think, but for the camera crew. She knows she is broken, but she still looks fantastic — this is the woman who in a few short years will throw herself at the toadish Aristotle Onassis and his vile whale-penis bar stools just to keep herself in sofas. I’m not sure Larrain, or even Portman, intended this portrayal to be quite so damning, so camp, so peculiar.

Portman has attempted a straight Oscar-bait impersonation of America’s “third youngest first lady” — for which you can blame Meryl Streep — but, at the edge of her acting ability, has ended up with something more interesting: a ghoul, a horrifying caricature. What oddness she lacks in her looks — dressed up, hair dyed, pillbox clamped to scalp, she resembles Jackie’s blander, prettier sister, Lee Radziwill — she makes up for with sheer effortful close observation, arms held awkwardly three inches from her body as she floats through the White House. It isn’t a performance, it’s an autopsy.

The film feels like a grimly curdled TV series, full of close-ups and jarring roving camerawork, and, of course, that’s what it is meant to be. It was intended for the small screen, where it would probably have had a cheesier title — My Jack or Seven Days of Death. On the big screen, it is something more disturbing and cold.

Grainy footage shows Jackie descending from the jet in Dallas. She is then shown a week later, pale, bewildered, conducting an interview with Life’s Theodore H White (Billy Crudup). She is interested, she breathes more than once, in “histo-wee”. By history, of course, she means image. For all her interest in the “truth”, she is only really interested in a highly varnished and Valiumed version of that truth. She is shown carefully styling Jack’s funeral — “I want the books about Lincoln” — and demanding copy approval on the interview. “Don’t think for a second I’m going to let you publish that,” she snaps after her shattering description of Jack’s death. She draws a deep drag on her fag. “And I don’t smoke.”

What a thrilling, unsettling hot mess of a film this is: she is by turns odious (“I used to be a reporter myself once”) and hysterical, cantering through the mud at Arlington National Cemetery, where she has insisted Jack will be buried instead of the traditional Kennedy plot. “Brookline is no place to bury a pwesident,” she sneers, in case we had forgotten how beneath her she thought the Kennedy family was.

Unsurprisingly, she has only two real friends: the Kennedys’ social secretary, Nancy Tuckerman (Greta Gerwig), and Bill Walton (Richard E Grant), a journalist who advised her on decor. So, parties and wallpaper. These are two fine, understated performances. Apart from them, Jackie is entirely alone, desperately looking for someone to play opposite.

For a while, she plays opposite herself (in a mirror), rolling drunkenly around her bedroom. At other times, she finds herself up against the soundtrack (by Mica Levy, the Under the Skin composer). The result is deep claustrophobia. She is closed in, shut away, constantly upstaged by everything around her: the ice-cold script, the heavy, Catholic music, the frantic editing. I imagine there are perhaps 10 editors lying collapsed under a desk, dying from nervous exhaustion after nights spent threading this wild film together, trying not to leave a single flabby moment. This is a film with about 3% body fat. It takes a lot of precision and effort to make something feel this exciting and this mad. Brilliant.

Lion starts with five words I hate: “Based on a true story.” No serious film makes an apology for itself before it’s started — can you imagine Larrain putting this in the credits for Jackie? It says: nanny’s here, sleepytime, this is what you must think.

In Lion, what we are told to think is this: India (specifically Calcutta) is a vast Oxfam charity video filled with poor but beautiful children who sleep on the streets. The lucky ones manage to escape nightly swoops by (I’m assuming: we are never told) brothel owners and paedophiles, who drag the children off into the night. One boy who flees — close-up for the charity video case study — is an emaciated five-year-old with an upturned nose and pointy teeth, Saroo (Sunny Pawar). No one can reunite him with his mother, so he is packed off to a children’s home, then adopted by a family in Australia.

At this point, we are meant to feel relief. Finally Saroo will get what he always wanted: a cool bunk bed. He might have a few years where he thinks about his mother a bit, but his new white life, complete with a replacement mother in the shape of Nicole Kidman, is presented as much better. What Saroo actually has is a boring existence in an Australian nowhere, where he will grow up into Dev Patel and study — this is where I shuddered — hotel management in Melbourne. His birth mother, meanwhile, is back in a village in India, presumably broken.

Lion gives her no screen time whatsoever, preferring to present Saroo’s story as a one-dimensional heartwarming tale of love and loss across the cultural divide — a kind of Exotic Marigold Hotel for orphans. But the performances are meaningless, the direction predictable. Someone has adapted the original book, by Saroo Brierley, in their sleep. It’s efficient as a weepie, but, as with so many sentimental films, crying feels like an empty bodily function.