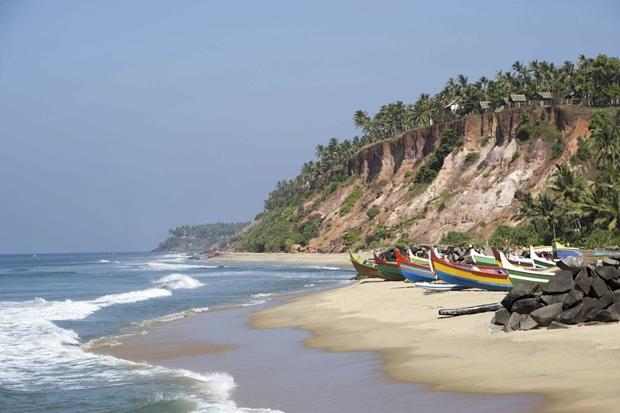 Learning to surf is fun in Kerala, with its warm, shallow waters, cheap but chic accommodation, and fabulous food.

Deva Madhavan reads palms — and he doesn’t pull his punches. As he scans the fleshy mounds and crinkled ravines of my right hand, the man with the 1,000-watt smile predicts that my eyesight will fail, business partners will rip me off and I’ll catch venereal disease if I cheat on my wife. I’ll also inherit an illness from my father: “I’m 99 per cent certain it’s piles. Don’t touch chicken, it’s dangerous.”

Yet when it comes to my future as a surfer, his precision fades. Madhavan sounds like a cornered politician. I will be safe in the water, he assures me. Avoid alcohol and I won’t have an accident. It’s wonderfully vague.

I push for details — I’m on a week of intense surfing tuition. Will I ever catch a decent wave? “Don’t worry,” he says, gazing across my shoulder to where a corpulent man soaps his vast belly in Varkala’s communal bathing tank. “You will not drown.”

It’s hardly a clear vision of success. Billabong and Rip Curl will not be knocking on my door. What’s a cast-iron certainty, however, is that I won’t find a more original, exotic and gloriously relaxed place to master the sport’s arts. Soul & Surf, a petite, discreet surf retreat with India’s only qualified instructors, is enjoying its first fully open season. Snuggled into the palms of a Keralan clifftop, an hour’s drive north of Trivandrum, it offers lessons on the Arabian Sea’s warm, shallow waves, alongside top-notch yoga and an intoxicating dose of multicoloured tropical culture.

It’s not for anyone partial to a lie-in. At 6.45am our five-strong class clambers into the back of a coral-green Mahindra Jeep — the other surf buggy is a pimped Hindustan Ambassador taxi — to drive to Main Beach. It’s a long way from Newquay. We drop down past Mother Ayurvedic Medicines, where Dr Ajay offers infertility and slimming treatments, the Cliff Lounge Guesthouse — “We will organising wedding and birthday party” (sic) — and Dr Sasidharan’s dental surgery. Our classroom is a honey-coloured beach, where a middle-aged Dutch lady sits in cross-legged meditation.

After stretching — a blur of windmilling arms and twisting necks — we practise popping up on the board, before entering the small, empty and consistent surf that makes Kerala perfect for beginners. Beneath cliffs of red laterite frescoed with foliage, guides Jasper and Olly push us into the white froth, help us to stabilise and offer encouragement. I attempt to stand and fall off — a sequence I repeat for two hours. Did Madhavan know something?

Sunset stretching will be crucial if I’m to improve, and I couldn’t be in better hands. Lucy Foster-Perkins, a contemporary dancer who has performed alongside the Berlin Philharmonic and Vienna State Opera, is passionate about surfing — and believes it’s a perfect partner for yoga. “They both require single-minded focus,” she says, rolling out mats on the hotel’s rooftop. “It’s about being in the moment.”

And that’s just the start. Along with developing balance and strength, the deep metronomic breathing of Vinyasa Flow keeps our movements fluid and relaxed — essential for surfing — while several sequences use identical muscles, most obviously Chaturanga, which echoes popping up on the board. “Yoga gives you body awareness,” claims Lucy, who also runs hugely popular London classes for deskbound surfers. “It takes your mind to different parts of your physique without looking: perfect for catching a wave where you’re gazing forward and need to position your back leg and align your hands.”

I’m not quite there yet. As we begin our class, illuminated by flickering candles and a Cecil B DeMille sunset, I’ve a more pressing concern. Humidity. Inspiration comes with perspiration. Torrents of it. Within minutes my mat is soaked with a moving swell of slippery sweat. Yoga on water? That must help my surfing.

The Indian blend of boards and bendy bodies is the brainchild of Sofie and Ed Templeton. Five years ago, jaded with careers in Brighton, they set off to pursue an endless summer. Their global surf odyssey headed east from Europe to Asia, Australasia and Central America via the South Pacific, but it was affordable Kerala, with its fabulous food and deserted waves, that stole their hearts.

They returned in 2010, renting a four-bed guesthouse in Varkala from October to May. As India’s monsoon ended and Britain slipped into winter, Ed took guests surfing and Sofie taught them yoga. After two seasons, they expanded, drawing on previous careers in design and fashion to sprinkle magic dust on an anodyne hotel with a peachy clifftop location. Generous licks of duck-egg blue paint; superb surf prints and antique Indian furniture breathed new life into the run-down building. The 15-room retreat was completed by a 150-year-old house whose elegant tiled roof shutters and serene wood interiors add a dash of traditional Keralan style.

With young, easygoing staff mingling with guests — including solo travellers — in its al fresco café, Soul & Surf is that ever elusive thing: great value, comfortable kip for twenty to forty-somethings, with the fun vibe of the best backpacker haunts. Despite having India’s only ISA-accredited (International Surf Association) guides — mainly patient, super-friendly Brits — it’s not a hangout for gnarly surf obsessives. “It’s far more balanced,” Ed stresses. “People come here for India. They enjoy catching a wave but it’s only one of many things they want to do.”

Hallelujah. I can work with that. My afternoons are spent visiting the local temple, where a moth-eaten elephant is chained to a palm tree, haggling over yak leather luggage with Tibetan shopkeepers and catching a rickshaw into the verdant interior, where hammer and sickle graffiti reflects political allegiances: a cultural ying to the week’s physical yang.

I return for Surf & Soul’s regular movie night. Projected on to a sheet beneath the palms, it’s served with curry leaf pizza, the hiss of breaking waves and mesmerising flashes of lightning — you don’t get that at Clapham Picturehouse. Big Wednesday, the iconic tale of lost innocence among a group of 1960s California surf buddies, has seriously ripped bodies, sun-bleached hair and effortlessly brilliant surfing.

It should be inspiring. Should be. But next day shows little improvement. Nor the next. Small Sunday becomes Midget Monday and Tiny Tuesday. It’s fabulous fun, the guides couldn’t be more helpful, but while the other rookies are attempting turns on more muscular waves, I’ve plateaued at base camp.

Back at Soul & Surf I meet Dominic, an impressively nonchalant Aussie. He describes surfing a remote reef where the waves are “consequential”. “Excuse me?” “Consequential. Eight to ten feet, over shallow lava beds. Wipeout and it’s 18 hours to the nearest hospital. Surfing there has consequences.”

I nod sagely, and decide to remain silent about my own wipeout just hours before. I bruised a toe, lost a contact lens and ripped an indecent hole in my lime green John Lewis board shorts. Now that, my friend, is consequential.

Another ten kids, many in underpants, swim around the headland to join the throng. It’s an extraordinary scene, as if India’s chaotic traffic has driven into the ocean: a frenzy of excited splashing pupils, guides and brightly coloured boards. Occasionally a surfer glides through the chaos on the fast-barrelling wave, or a fishing boat putters back to the beach: the signal to clear the water, grab a rope and help haul the catch on to the sand. It really isn’t Newquay.

Ed now aims to shape the development of the area’s surf tourism for the locals’ good — a contrast to Bali’s expat-dominated scene. From today’s manic crowd, two teenagers — whiplash thin Usif and Jerry — are hot contenders to become paid assistants, and possibly, the first qualified Indian surf teachers. I witness other signs of surfing’s new Asia wave during my week. At Main Beach, the umbrella man — whom Ed’s team taught to surf — rents second-hand boards, their war wounds betrayed by crinkly lines of resin.

Farther south, behind Varkala Beach, where the Sea Sun Café offers fish tikka masala and spinal baths, two slightly alarming murals have appeared. One shows a dude riding a massive wave while holding a coke bottle — not recommended for beginners — the other a terrified woman surfing alongside two dolphins. They adorn the Varkala Marine Palace Restaurant marking the launch of Papanasam, Soul & Surf’s new non-residential surf school, the first in India to offer professional tuition. The day I leave it’s opened by the chief of police, council bigwigs and a ceremonial elephant.

I could do with the extra help. I’m pulling out all the stops to improve, including refuelling on astounding ayurvedic scoff. Mrs Sharjah Kumari serves nine-dish banquets in the backyard of her blue-walled house, next to a tethered cow that urinates with the force of a tropical deluge. Underneath fading photos of her in-laws, I devour feather-light poppadoms from a plastic bucket, and eat vegetable thoran, riata aviyal and okra off palm leaves.

I don’t miss a single yoga session, nor the energy-boosting pranayama — breathing exercises that can add 70 per cent more oxygen to your body. Surfing is starting to dominate my every waking thought. When I spot a tiny lady carrying a huge rock on her head for some snoozing construction workers, I don’t think the obvious: how unchivalrous; what about a wheelbarrow? I think: magnificent central axis, perfect balance, good neck muscles, she’d breeze a green wave.

Something I never quite manage. On my last day I pop up like an arthritic pensioner for three magnificently shaky seconds, before abandoning my board to body surf on Varkala’s walls of warm brine. It’s hardly a conventional triumph but who cares? The legendary Gerry Lopez, who once combed his hair while riding Hawaii’s thunderous Pipeline break, claimed the best surfer in the water is the guy having the most fun. So thank you Soul & Surf. For one week you’ve turned me into a champion. Deva Madhavan take note.

How to get there

Four yoga breaks with a difference

If yoga has improved your balance, you can blend it with paddle boarding in the Seychelles. At Raffles Praslin, guests glide through the Indian Ocean while stretching into different poses, apparently intensifying the workout’s impact on strength and flexibility.

Book into Can Amonita, a six-bed finca overlooking Ibiza’s San Lorenzo Valley, with a superb pool and shady yoga deck, and you can relax the body and expand the mind.

Thankfully, you don’t do yoga and kayaking at the same time. Fitness coach and yoga expert Tim Ganley will paddle out with you to some of the island beaches for stretching sessions next to the Gulf of Mexico near St Petersburg in Florida. Expect dolphins and pelicans to interrupt your serenity.